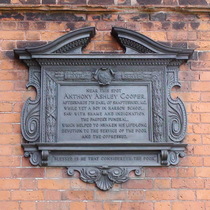 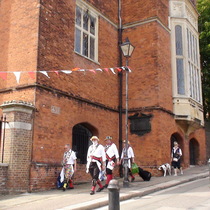 {In the top section of the fasces-style border:}
Love  Serve

Near this spot Anthony Ashley Cooper, afterwards 7th Earl of Shaftesbury KG, while yet a boy in Harrow School, saw with shame and indignation the pauper’s funeral, which helped to awaken his life-long devotion to the service of the poor and the oppressed.

“Blessed is he that considereth the poor”

The quotation is from Psalm 41, the King James Version.

While at school, Shaftesbury, a Christian teenager, witnessed a pauper's funeral pass by this spot, performed by drunken pall-bearers, which left him shocked, and committed to do what he could, to prevent such horrors in the future. One would guess that much worse had happened to the pauper while alive, but perhaps Shaftesbury's childhood, loveless though it apparently was, had sheltered him from the harsh realities of the poor.

The Listing entry explains: "West wing, originally built 1615 and incorporating panelled schoolroom probably about that date. Architect Mr Sly. East wing added 1820 by C R Cockerell and the Whole, apart from the left flank wall, appears to be refaced in red brick at that date. Two main storeys with basement and staircase link between the wings. Mullion and transom window and oriel at first-storey. Stepped gables with tiled roof."

The Harrow Heritage plaque is on the east wing (right) flank wall.

For our site photos we always like to have a person in the shot to give scale; someone with a dog is good, a cyclist even better, but our scoring system was seriously challenged when this team of Morris Dancers walked into shot.

This section lists the subjects commemorated on the memorial on this page:
Shaftesbury - Harrow

This section lists the other memorials at the same location as the memorial on this page:
Shaftesbury - Harrow

The Old Schools This is the original building at Harrow, finished in 1615 an...

{Below an image of the communications satellite, Telstar}Joe Meek, record pro...

Site of St Thomas the Apostle church, destroyed in the Great Fire 1666. Corpo...

In the correspondence pages of the 1927 BMJ the man named on the plaque, Fran...