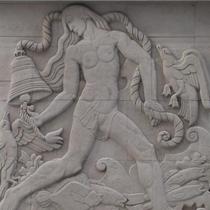 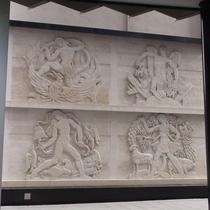 Phillip Ward-Jackson in his encyclopaedic "Public Sculpture in the City of London" identifies these reliefs as representing the four elements, clockwise from top left: Fire, Air, Earth, Water. In Water the female figure rings the Lutine Bell, which actually happens in Lloyd of London whenever a ship goes down. There were 85 other (smaller) pieces of Woodford's work on this building. Let's hope they also have been rescued and are perhaps on display inside the Willis building.

From Wikipedia "In the 1950s Woodford made a set of reliefs representing the four elements for the Lloyds building in Lime Street in the City of London. They were placed very high up; Arthur Byron in "London's Statues" describes them as "barely visible."[7] Following the demolition of the building they were installed on a wall at street level as part of the landscaping of the Willis Building on the same site."

This section lists the subjects commemorated on the memorial on this page:
Lloyds of London 1958 building

This section lists the subjects who helped to create/erect the memorial on this page:
Lloyds of London 1958 building