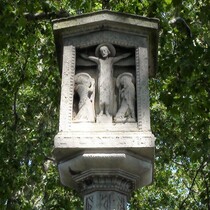 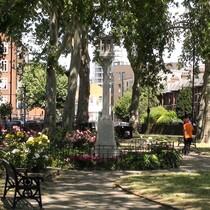 {On the south face of the base:}
To the honoured memory of the men of Shacklewell who made the supreme sacrifice in the Great War of 1914 - 1918.

{The other 3 faces carry the alphabetical list of 106 names - see Subjects commemorated.}

The carving on the south face has a peculiarity which we think must be an error. It's normal for all the lettering to be in caps with some initial letters enlarged, and sometimes the last letter of a word as well. For example here the S and the last L of Shacklewell are enlarged, which is fine. But in "THE GREAT WAR" the enlarged letters are, in sequence: T, G, R, T, W. That R makes us very uncomfortable.

The Imperial War Museum War Memorials Register has a list of 101 names (versus the 106 on the monument) and there are a few names that are not exactly the same on the two lists. We have noted all these discrepancies on the pages for the names affected.

All inscriptions are (2020) in good condition as is the shaft and the unusual lantern, but the base of the shaft is very weathered and the join between it and the shaft is awkward. We think the monument has been restored quite recently and all the inscriptions recreated.

This section lists the subjects commemorated on the memorial on this page:
Shacklewell WW1 memorial

men of Shacklewell killed in WW1