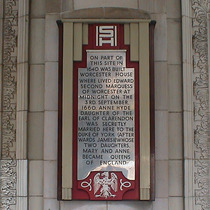 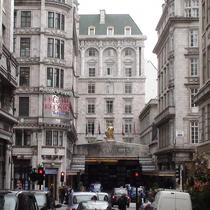 SH
On part of this site in 1640 was built Worcester House where lived Edward, second Marquess of Worcester. At midnight on the 3rd September, 1660, Anne Hyde daughter of the Earl of Clarendon was secretly married here to the Duke of York (afterwards James II) whose two daughters, Mary and Anne, became Queens of England.

This section lists the subjects commemorated on the memorial on this page:
Savoy - eagle

Used to be on the Savoy Hotel and Theatre site. Not to be confused with Worc...

This section lists the subjects who helped to create/erect the memorial on this page:
Savoy - eagle

This section lists the other memorials at the same location as the memorial on this page:
Savoy - eagle