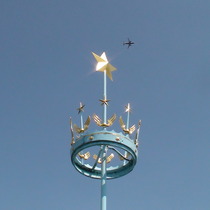 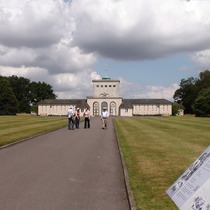 They died for freedom in raid and sortie over the British Isles and the lands and seas of Northern and Western Europe.

In this cloister are recorded the names of twenty thousand airmen who have no known grave.

{At the centre of the courtyard, on a low, large stone, possibly reminiscent of a coffin:}
Their name liveth for evermore

{On a steel plaque just inside the entrance:}
Address by Her Majesty Queen Elizabeth the Second at the unveiling of the Runnymede Memorial, 17th October 1953

This memorial has been built in proud memory of the men and women of the Air Forces of the British Commonwealth and Empire who lost their lives serving from bases in the United Kingdom and North-West Europe in the Second World War, and who have no known graves.
They were part of a glorious and far larger company who laid down their lives for freedom; and this memorial is one of many others, built, wherever the battle raged, so that they may not be forgotten.  Twenty thousand four hundred and fifty-five names are recorded on these stones; and all races and countries of the British Commonwealth have here their representatives.
It is very fitting that those who rest in nameless graves should be remembered in this place.  For it was in those fields of Runnymede seven centuries ago that our forefathers first planted a seed of liberty which helped to spread across the earth the conviction that man should be free and not enslaved.  And when the life of this belief was threatened by the iron hand of tyranny, their successors came forward without hesitation to fight and, if it was demanded of them, to die for its salvation.  As only free men can, they knew the value of that for which they fought, and that the price was worth paying.
They were not alone in this knowledge and in this sacrifice.  At this very hour a memorial porch is being unveiled in Chelmsford Cathedral to commemorate some of those American airmen who fought together with us against the same aggression.
With prophetic insight, Pope wrote of this hill on which we stand:

“On Cooper’s Hill eternal wreaths shall grow
While lasts the mountain, or while Thames shall flow”.

Indeed the heroism of each will be remembered for as long as this memorial shall stand.  But that which was done by all will, with God’s help, still be remembered when those stones have crumbled into dust.  For wherever and for as long as freedom flourishes on the earth, the men and women who possess it will thank them and will say that they did not die in vain.  This is their true and everlasting memorial.

{Another steel plaque near the entrance gives some details of the Subjects commemorated and:}
This memorial was built and is maintained by the Commonwealth War Graves Commission.
Architect: Sir Edward Maufe

{Engraved in the glass of a window in the gallery:}
The first rays of the dawning sun
Shall touch its pillars,
And as the day advances
And the light grows stronger,
You shall read the names
Engraved on the stone
Of those who sailed on the angry sky
And saw harbour no more.
No gravestone in yew-dark churchyard
Shall mark their resting place;
Their bones lie in the forgotten corners
Of earth and sea.
But, that we may not lose their memory
With fading years, their monuments stand here.
Here, at the heart of England, half-way between
Royal Windsor and lordly London; looking down,
Here, where the trees troop down to Runnymede.
Meadow of Magna Carta, field of freedom,
Never saw you so fitting a memorial,
Proof that the principals established here
Are still dear to the hearts of men.
Here now they stand, contrasted and alike,
The field of freedom's birth, and the memorial
To freedom's winning.

And, as evening comes,
And mists, like quiet ghosts, rise from the river bed,
And climb the hill to wander through the cloisters,
We shall not forget them. Above the mist
We shall see the memorial still, and over it
The crown and single star. And we shall pray
As the mists rise up and the air grows dark
That we may wear
As brave a heart as they.
Paul H. Scott

The poem was apparently written soon after the memorial was completed.  Photo of the engraving.

The main building, at the centre of the northern section, is also the tallest and contains spiral staircases up to the roof from which there is a splendid view from Windsor Castle via Wembley to the City.  This building contains some items of interest.  In a small mirror and glass case there is an exquisite key: “The key presented to Her Majesty the Queen by the architect Sir Edward Maufe RA, 17th October 1953".  Nearby is “The visitors book of October 17th 1953.  The signatures opposite are in order as below: 1. Her Majesty the Queen. 2. His Royal Highness the Duke of Edinburgh, 3. Her Majesty Queen Elizabeth the Queen Mother. 4. His Royal Highness the Duke of Gloucester.”  all this thumped out on an old manual typewriter, presumably in 1953.

Architect was Sir Edward Maufe; sculpture (relief statues of Courage, Victory and Justice) by Vernon Hill. Engraved glass and painted ceilings designed by John Hutton. Listed. This extensive memorial would be very peaceful were it not for the relentless intrusion of planes from Heathrow. Even these airmen might find it intolerable.

The memorial is a moving, respectful place to visit. The views from the roof are splendid – Windsor Castle, Wembley, the City. The architecture and design – Festival-of-Britainesque, the best of 1953, untouched by nasty modernisations.  With one ghastly exception: some health-and-safety boards explaining how to negotiate a spiral staircase: “Warning.  As these access stairs are of a spiral construction they are more narrow the nearer they become to the centre.  Visitors should ensure that they keep to the outside of the stair case where the treads are at their maximum width and use the hand rail at all times.” Etc.  We are not making this up.

This section lists the subjects commemorated on the memorial on this page:
Runnymede Air Forces Memorial

This text is taken from a steel plaque at the entrance to the memorial: The ...

This section lists the subjects who helped to create/erect the memorial on this page:
Runnymede Air Forces Memorial

Sculptor and illustrator.  Born Halifax, Yorkshire.  Other work in London in ...