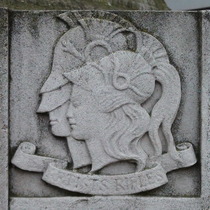 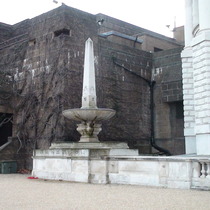 {On the south facing front:}
1914 - 1918, in memory of the officers and other ranks of the Royal Naval Division who gave their lives for their country.

{On the low west wall, almost disappearing behind the Admiralty Citadel (vine-covered bunker):}

Blow out, you bugles, over the rich Dead!
There's none of these so lonely and poor of old,
But, dying, has made us rarer gifts than gold.
These laid the world away; poured out the red
Sweet wine of youth; gave up the years to be
Of work and joy, and that unhoped serene,
That men call age; and those who would have been,
Their sons, they gave, their immortality.
Rupert Brooke, 1887 - 1915, Hood Battalion

{On the low front wall but over to the right:}
This memorial designed by Sir Edwin Lutyens was unveiled on the Horse Guards Parade at the corner of the Admiralty on April 25th 1925 the tenth anniversary of the landing on Gallipoli.
Removed in 1940. Erected at Greenwich in 1951 and reinstated on this site in 2003.

Near the base of the four sides of the obelisk water jets into the basin below. The low wall around this fine, plain monument is decorated with the emblems of different sections. We have used the Artists Rifles' emblem as our detail picture. Unveiled by Winston Churchill. The Brooke poem is the first verse of "The Dead" of 1914.

This section lists the subjects commemorated on the memorial on this page:
Royal Naval Division - WW1

Officers and other ranks of the Royal Naval Division who gave their lives for...

This section lists the subjects who helped to create/erect the memorial on this page:
Royal Naval Division - WW1