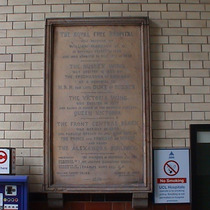 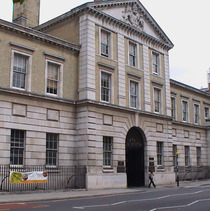 The Royal Free Hospital was founded by William Marsden MD in Greville Street in 1828 and was removed to this site in 1842.

The Sussex Wing was erected in 1855 by the Freemasons of England as a memorial to HRH the late Duke of Sussex.

The Victoria Wing was erected in 1877 and named in honor of her gracious majesty Queen Victoria.

The front central block was rebuilt in 1895 and publicly opened on July 22nd 1895 by the Prince and Princess of Wales and named the Alexandra Building.
{later to be Edward VII and Queen Alexandra}.

What luck that a dental hospital should be housed in a building sporting dentile cornicing! There is a lot of history about this building and institute at UCL Eastman Dental Institute.

A caretaker told us these buildings used to be a barracks - there was a ramp for the horses to access the basement and posts to which they were tied still exist down there. He also said it is scheduled for redevelopment. We confirm that in 1842-4 the Royal Free Hospital moved here into ex-Army Barracks - see the splendid Lost Hospitals for more information and photographs.

The development plaque is in the entrance passage. The fountain and Sussex wing memorial are in the courtyard.

This section lists the subjects commemorated on the memorial on this page:
Royal Free Hospital - development

Founded by William Marsden as the London General Institution for the Gratuito...

Chairman of Weekly Board at the Royal Free Hospital in 1895.

This section lists the other memorials at the same location as the memorial on this page:
Royal Free Hospital - development

The Duke of Sussex had died just 3 years before this plaque was erected. We ...

Gladstone served as Member of Parliament for Greenwich from 1868 to 1878.