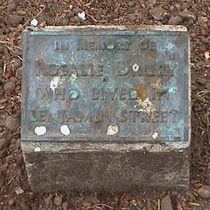 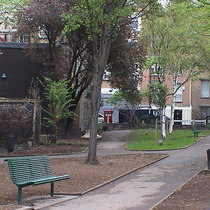 In memory of Rosalie Drury who lived in Benjamin Street.

Andrew Behan researched Rosalie Drury and presented us with a problem. A mother and daughter shared that name and both lived in Benjamin Street for many years. Rosalie Snr had just the one child and Rosalie Jnr had no children so we think it most likely that the tree was planted by Jnr in memory of Snr, but we may have this wrong - it could have been planted by someone else in memory of Jnr.

Rosalie's tree is the nearest, Doris's is in front of the first silver birch.

This section lists the subjects commemorated on the memorial on this page:
Rosalie Drury

Born Rosalie Sawyer on 11 March 1887 in Hoxton, the eldest of the eight child...

This section lists the subjects who helped to create/erect the memorial on this page:
Rosalie Drury

Rosalie Drury was born on 27 August 1913 the only child of Francis Hubert Dru...

This section lists the other memorials at the same location as the memorial on this page:
Rosalie Drury

Tilla platyphyllos (broad leaved lime) planted by The Right Hon. The Lord May...

The unusual plaque is laid into the ground in front of the tree.