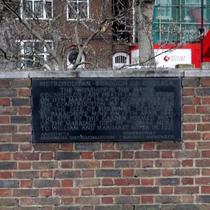 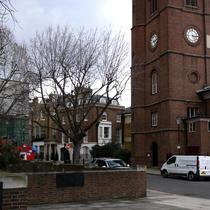 The worshipful the Mayor Councillor Lady Heath laid this stone on 11th March 1964 to commemorate the construction of Roper’s Garden on the site of buildings destroyed by parachute mine on 17th April 1941. The site of this garden formed part of the marriage gift of Thomas More to William and Margaret Roper in 1521.
Architects Bridgwater Shepheard & Epstein
Contractors Marshall-Andrew & Co.
Metropolitan Borough of Chelsea

Parachute mines were used in the early 40s; the end of the war was characterised by the use of V-1s and V-2s. Parachute mines are recorded as having fallen on other London sites on 16 and 17 April 1941. A plaque in the porch records the next door Chelsea Old Church as having been attacked on 16 April 1941 but that raid began on the 16th and continued into the morning of the 17th so it seems likely this Roper's Garden site was destroyed in the same raid, possibly by the same bomb.

This sunken garden was formed from the basements of the buildings that were destroyed.

Thanks to Jamie Davis for reminding us about this one.

This section lists the subjects commemorated on the memorial on this page:
Roper's Garden

These were used initially by the Royal Air Force Bomber Command and the Germa...

Daughter of Sir Thomas More. After her executed father’s parboiled head had b...

This section lists the subjects who helped to create/erect the memorial on this page:
Roper's Garden

The "save the Oval" campaign was not, as we first thought, made necessary by ...

This market was opened on November 7th 1888 by the Right Honourable Sir Polyd...