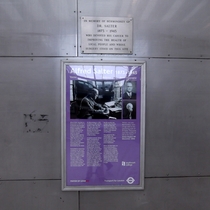 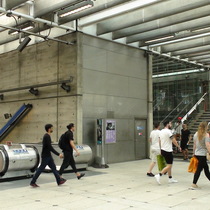 {Upper plaque:}
In memory of Bermondsey GP, Dr. Salter, 1873 - 1945, who devoted his career to improving the health of local people and whose surgery stood on this site.

{Lower information panel, around photographs of Doctor Salter and his wife:}
Alfred Salter, 1873 - 1945, doctor, politician, reformer, peace campaigner.
Alfred Salter was born in Greenwich in 1873. At 16 he became the youngest person to study medicine at Guy's Hospital. A brilliant, prize-winning student, he chose to work as a doctor in Bermondsey, opening his first surgery there in 1900. Bermondsey was then a very poor area with overcrowded housing, poor sanitation and employment dominated by the docks.
Committed to improving conditions for the local community, Alfred Salter became involved in local government and politics, first as a Liberal in 1903, and from 1908 as a member of the newly formed Labour Party. He served on Bermondsey and London councils, and was elected Labour MP for Bermondsey in 1922, remaining an MP until his death in 1945. His wife, Ada, was also active in politics and in 1910 became the first woman councillor in London, later serving as Mayor of Bermondsey.
A medical pioneer, Alfred Salter campaigned to clear the slums and improve public health. He set up London's first public health centre in Grange Road, providing free health care for those who could not afford to pay. This was 20 years before the creation of the National Health Service. A centre was opened to combat TB in 1926, and a 'palace of baths' in 1927; when there were only 150 bathrooms in 20,000 homes in Bermondsey, a place to bathe, swim or do the laundry was a major step forward. Alfred and Ada also worked to replace the slum housing with new houses, wide avenues and gardens.
Throughout his life, Alfred Salter was passionately opposed to war, and was a leading figure in the peace movement.
Alfred and Ada Salter are remembered locally; a school, houses, gardens and one of the buildings at Southwark College are all named after them, and a series of statues on the Thames River Walk show Alfred and his only child Joyce, who died tragically of scarlet fever at the age of eight.
'Britain, not only Bermondsey, owes a huge debt to the pioneering work of Dr Salter. Thousands owe their quality of life to his vision.' Simon Hughes MP (December 2002)
Southwark College

The plaques are located on the platform side of the ticket barriers.

This section lists the subjects commemorated on the memorial on this page:
Doctor Alfred Salter - Bermondsey Station

Daughter of Doctor Alfred and Ada Salter. She contracted a virulent form of s...

This section lists the subjects who helped to create/erect the memorial on this page:
Doctor Alfred Salter - Bermondsey Station

A former further education college, with sites in Waterloo, Bermondsey and Ca...

Vollasky HouseThis block was built in 1956 by Stepney Borough Council and was...

We love the repeated "etc."s to indicate the Duke's excessively long list of ...