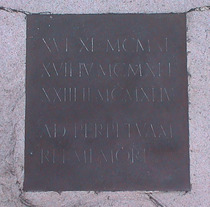 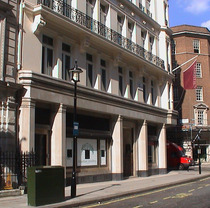 Having been walked on for many decades the plaque is very worn but with David Hopkins' help we believe we now have it transcribed correctly, and translated as:

David points out that all 3 dates recall significant bombing raids in London during WW2 each of which damaged this building, and possibly killed people inside.  The City of Westminster Archive Centre hold 3 photos of the nearby Orleans Club, King Street following the bombing raid of 16 November 1940.  At British History we find "Christie's premises were destroyed by incendiary bombs on the night of 16–17 April 1941. The firm moved to temporary quarters at No. 16a St. James's Street and later to Spencer House. When the King Street premises were rebuilt in 1952–3 the main façade of the old building, which had escaped destruction, was retained and reconstructed as part of the new work."  And at West End at War we find: "On 23 February 1944, a stick of four high explosive bombs caused massive damage to the area of Clubland between King Street and Pall Mall SW1 and northwards as far as Jermyn Street.”

This brass plaque is on the floor of an entrance, now disused, but visible from the street. When we first spotted it in about 1999, the building was being used by Spinks (who could offer no explanation) so we put it on our Puzzle Corner where David Hopkins saw it in 2012. He realised we had mis-transcribed some of the Roman numerals and so unlocked the answer.

This section lists the subjects commemorated on the memorial on this page:
Roman numerals at Christies

This stone which was unveiled by the Rt Hon the Lord Mayor of London alderman...