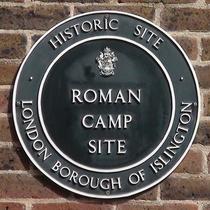 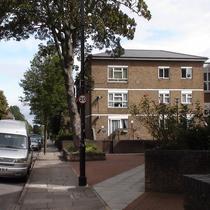 Credit for this entry to:
Ruth Richardson

Difficult to find even if you know it's there - took us three visits. This plaque does not face the road, but west, and hides behind a brick balustrade and a tree. Thanks to Ruth for first alerting us and then insisting that it really is there! Ruth also tells us that it was erected with no publicity and she is unaware of any information about what was dug up to justify the plaque.
Not one to beieve everything he reads on plaques, our colleague, Alan Patient, asked Islington Local History Centre about it. Dec 2011 response: "An 1805 Dent map suggests remains of a roman camp around what was to become the Hungerford Road area. Most historical texts suggest there were fortifications in Highbury, Battle Bridge (King's Cross) and Barnsbury. Highbury Hill might have been a summer camp, as its elevation might have proved useful. However, that said, although the plaque is a genuine council plaque it seems that the information used to justify it was a little questionable. Mary Cosh, for instance, explains that the local "roman remains" have been identified as medieval and many of the theories of roman fortifications are from texts from the eighteenth to mid-twentieth centuries. Of the modern literature which does suggest roman activity in Islington I have not found mention of it happening where Hungerford Road now stands."

This section lists the subjects commemorated on the memorial on this page:
Roman Camp

There is little evidence to support the existence of this camp.  So, rather c...

This section lists the subjects who helped to create/erect the memorial on this page:
Roman Camp