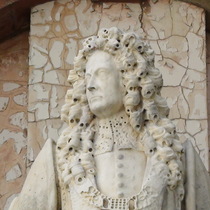 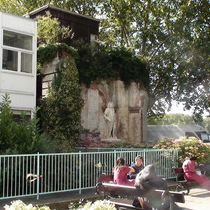 {Inscribed on the right side of the plinth:}
To Sr. Robert Clayton Knight, born in Northamptonshire, citizen and Lord Mayor of London, President of this Hospital, Vice-President of the new work house, and a bountiful benefactor to it, a just magistrate, and brave defender of the liberty and religion of his country, who besides many other instances of charity to the poor, built the girls’ ward in Christ’s Hospital, gave first toward the rebuilding of this house £600 and left by his last will £2,300 to the poor of it. This statue was erected in his life time by the governors. A. D. MDCCI as a monument of their esteem of so much worth, and to preserve his memory after death was by them beautified, A.D. MDCCXIV.

{The left side of the plinth carries the same inscription in Latin.}

The inscription is quite badly damaged but we found a transcription in a 1776 book on the history of London, which is, we believe, very close to what is actually there. It says the statue was erected in 1701, while Clayton was still alive, and improved in some way in 1714 (the addition of this inscription at least), seven years after his death.

The front of the plinth has a high relief showing 2 rather ugly and damaged cherubs presenting a shield with a red cross (st George) with a raised white boss on the white background.

This Grade 1 Listed statue was first erected in Southwark at St Thomas's Hospital (in the third court which he had funded). c.1870 it moved here with the hospital.

The setting of this statue is unusual. We believe that classical wall behind, with its pillars and arch is a section of the old hospital building, now demolished, but its distressed surface has surely been created. It's very successful but the atmosphere is rather ruined by the ugly modern building to the left.

See our page for the Thomas Guy statue for the latest on the hospitals' responses to the Black Lives Matter campaigns regarding these statues.

This section lists the subjects commemorated on the memorial on this page:
Robert Clayton statue

This section lists the subjects who helped to create/erect the memorial on this page:
Robert Clayton statue

{Inscription between the crests of Reinickendorf and the Royal Borough of Gre...