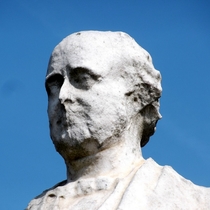 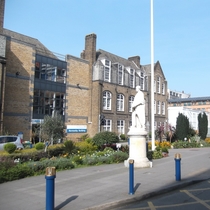 The statue was originally erected in the great hall of the old King's College Hospital, near Lincoln's Inn Fields. and then in 1863, moved to the hospital's great hall in the Strand. When the hospital moved here in 1913 the statue was erected in its current location but, not having been designed for the outdoor life, it is showing the unkind effects of the weather over the last 100-odd years.

For other moved statues of charitable founders see Whittington at Archway.

This section lists the subjects commemorated on the memorial on this page:
Robert Bentley Todd

Physician. Born in Dublin. He became licensed at the Royal College of Surgeon...

This section lists the subjects who helped to create/erect the memorial on this page:
Robert Bentley Todd

This statue was erected in commemoration of the 350th anniversary of the foun...