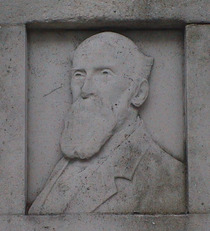 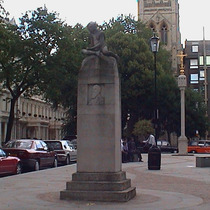 {On the south face, below the portrait:}
Vota vita mea
Reginald Brabazon, 12th Earl Meath, KP, 1841 - 1929, patriot and philanthropist.
{The Latin translates as "My vows/prayers are my life".}

{on the north face:}
To him the British Empire was a goodly heritage to be fashioned unto a city of God.

{On the east face:}
One King, one Empire, Empire Day

The memorial was designed by Hermon Cawthra RA and unveiled in 1934. It is grade II listed.
A City of Westminster information plaque on the ground at the centre of the traffic island provides biographical information about Lord Meath (look under Subjects Commemorated for this), but does not explain the emphasis on the British Empire inscribed on the faces of the memorial. We learn elsewhere that in 1903 Reginald Brabazon created Empire Day, cleverly designed to coincide with Queen Victoria's birthday, on May 24. In 1958 it was renamed Commonwealth Day.

This section lists the subjects commemorated on the memorial on this page:
Reginald Brabazon, 12th Earl Meath

Born near Belgrave Square. The Earl of Meath was actively engaged in social ...

This section lists the subjects who helped to create/erect the memorial on this page:
Reginald Brabazon, 12th Earl Meath