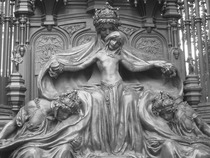 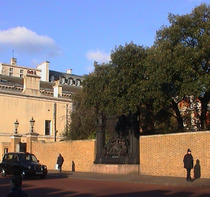 Credit for this entry to:
Erin Vance

{In the bronze base below the figures:}
Queen Alexandra
1844 1925
A tribute of the empire's love
{On the right hand side of the base:}
A.B. Burton Founder

{In the stone below:}

The building behind this monument, Marlborough House, was where Alexandra and Edward lived until he succeeded to the crown. And then, after his death, it was her official residence until her death.

The memorial was unveiled by her son, King George V, on the 21st anniversary of the introduction of Alexandra Rose Day, when, to celebrate the 50 years since Alexandra arrived from Denmark for her wedding, roses were first sold throughout the country on behalf of hospitals.  This was an annual event for 10 years, only ceasing on the 60th anniversary of her arrival.  The Empire memorial to Queen Alexandra was made up of this sculpture and support for the Queen Alexandra’s Imperial Military Nursing Service.

Caroline's Miscellany has a good post on this memorial.

The black and white picture of the memorial was taken by Erin Vance. It is a very high quality photograph - much better than we usually manage.

This section lists the subjects commemorated on the memorial on this page:
Queen Alexandra - SW1

This section lists the subjects who helped to create/erect the memorial on this page:
Queen Alexandra - SW1