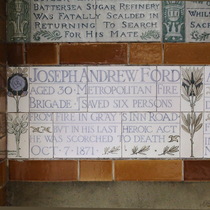 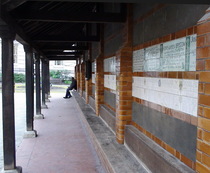 Smith
When Alfred Smith died heroically in Finsbury, close to this memorial, as a result of a 1917 WW1 bomb, funds were raised for a plaque here and 13 June 1919 it was placed at the start of row 2 (A), the row above the two already completed [count 49]. Mary did not like the Doulton style, and her energies were more involved in Compton, so by 1930 she had withdrawn from the committee.

This section lists the subjects commemorated on the memorial on this page:
PP - 4A - Ford

This section lists the subjects who helped to create/erect the memorial on this page:
PP - 4A - Ford

This section lists the other memorials at the same location as the memorial on this page:
PP - 4A - Ford