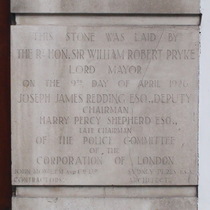 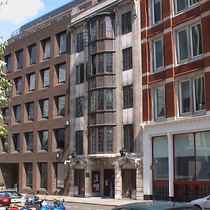 This rather attractive building, designed as a Police Station by Sydney Perks, was erected in 1926. The foundation stone is to the right of the rightmost entrance.

This section lists the subjects who helped to create/erect the memorial on this page:
Police station foundation stone

One of the largest construction and civil engineering companies in the UK. Jo...

This section lists the other memorials at the same location as the memorial on this page:
Police station foundation stone

Corporation of the City of London Site of the Saracen's Head Inn, demolished...

Sir Hiram Maxim and his gun