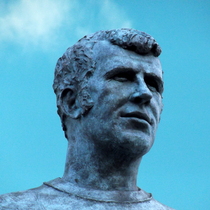 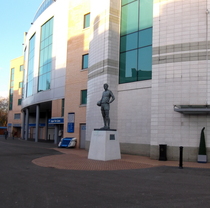 {On the four faces of the plinth, clockwise starting at the front:}
Peter Osgood.

Ossie King of Stamford Bridge
Stamford Bridge has many heroes but only one king. Graceful technician nerveless striker. Icon of the swinging sixties. Adored by fans, scorer of immortal cup final goals.
A big man for a golden age.

This sculpture of Peter Osgood was erected by Chelsea Football Club and unveiled on Friday 1st October 2010 by Bruce Buck and Lynn Osgood in the presence of his friends and colleagues.

This section lists the subjects commemorated on the memorial on this page:
Peter Osgood statue

This section lists the subjects who helped to create/erect the memorial on this page:
Peter Osgood statue