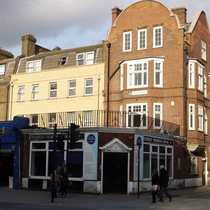 The East London Record, No 15, 1991, in an article by Harold Finch entitled "Frederick Rogers: Bookbinder and Journalist":
"In 1988, Southwark Council erected a plaque in memory of these pioneers of the pensions campaign, outside what is left of the Browning Settlement (now Herbert Morrison House) in the presence of Neil Kinnock, Jack Jones and other Labour leaders."

This plaque is not visible on the outside of the building so no photo and we've marked it as lost, but it's possible the Robert Browning Settlement have it.

This section lists the subjects commemorated on the memorial on this page:
Pensions plaque

This section lists the other memorials at the same location as the memorial on this page:
Pensions plaque

The plaque has mis-named the painting; it's actually 'Hampstead Heath, with t...