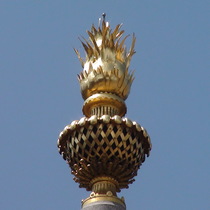 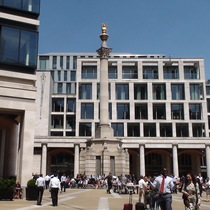 {No inscription nor any explanatory plaque, that we have found.}

It's certainly a vent shaft for the car park beneath, but this column, or rather the flaming urn, is apparently also a memorial, according to the developer's website, to both the Great Fire of London and also the fire and destruction wrought in the area by the WW2 Blitz.  We wonder if the panels of running water are a reference to the putting out of the fires.  (Just a pity there are no facilities for drinking water.)

That website also says: "The column itself is a recreation of those designed by Inigo Jones for the west portico of the old St Paul’s. Destroyed during the construction of Wren’s present day cathedral, replica columns of almost identical proportions and design can still be viewed at the west, north and south porticos."  So we have decided to broaden the scope of this memorial to include the old St Paul's Cathedral.

The form of this edifice - a column topped with a flaming urn - makes it a modern version of that great Great Fire memorial, The Monument.

At the time of the Great Fire Paternoster Row was known for the mercers' shops selling various textiles. By the 19th century through until WW2 the street was the centre of London's publishing trade.

This section lists the subjects commemorated on the memorial on this page:
Paternoster Square column

This section lists the subjects who helped to create/erect the memorial on this page:
Paternoster Square column