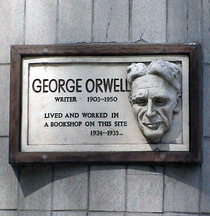 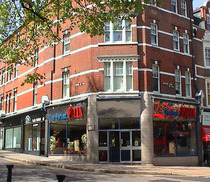 English Heritage blue plaques may be technically the best but individual plaques like this lift the spirits. Margaret Drabble helped erect this plaque and arranged for Sonia, Orwell's widow, to unveil it.

The head is modeled on a half-size bust by David Hadfield, owned by Richard Blair.

The bookshop here where Orwell worked was 'Booklovers' Corner'.

October 2010: The local paper reported that the face on this plaque has been chipped off. January 2013 Nick Booth sent us a photo showing exactly that - very sad. Then, October 2014: The Ham and High reports that the face is back. Hoorah! Not exactly the same; the new one is bronze coloured and looks fatter. We'll keep our picture so you know what the original looked like.

July 2015: The CNJ reports that this head has been unveiled for the third time. Now cast in resin everyone is hopeful that it will be the last.

This section lists the subjects commemorated on the memorial on this page:
Orwell - Pond Street