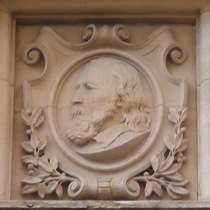 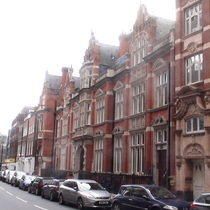 Tennyson died October 1892, the same year that this building was 'erected' according to the foundation stone, though above the entrance 1893 is given. This must have been a rush job following his death. Wonder who was kicked out in favour of Tennyson?

This section lists the subjects commemorated on the memorial on this page:
Old Westminster Library - head 6 - Tennyson

This section lists the other memorials at the same location as the memorial on this page:
Old Westminster Library - head 6 - Tennyson