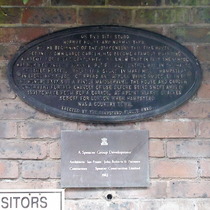 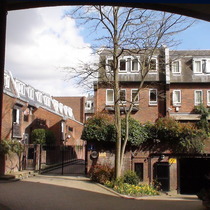 On this site stood Norway House and Norway Yard.
By the beginning of the 19th century this fine house set in its own large garden, had become a famous boarding academy for young gentlemen.  We know that in 1805 the school was run by Bidmead & Johnson, but by 1840 control was in the hands of James Hessey.  There is a story in Mary Hill’s “Hampstead in Light and Shade” of bread and apples being smuggled in to the hungry pupils by a kindly maidservant.  The house and garden underwent further changes of use before being swept away in 1931 to make room for a garage.  At a point nearby coaches set-off for London when Hampstead was a country town.

Erected by the Hampstead Plaque Fund

These two plaques are hidden in the shade above the yellow sign at the centre of the picture. This courtyard/parking area is through an arch off the High Street.

This section lists the subjects commemorated on the memorial on this page:
Norway House

Norway House and Norway Yard.  By the beginning of the 19th century this fine...

This section lists the subjects who helped to create/erect the memorial on this page:
Norway House

This is the home where he died, 2 years earlier than the plaque would have it.