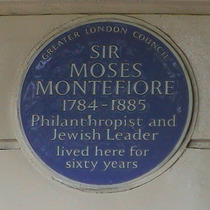 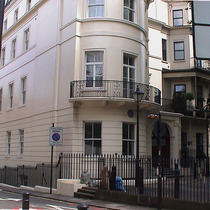 2019: A flat was available to rent and Homes and Property publicity included this information about the house: "The Grade II-listed corner house was originally constructed between 1823 and 1825 by Thomas Martin, the builder of Portman Square to a design by designed by architect John Goldicutt and is one of the few Georgian buildings surviving on Park Lane. The first resident was stockbroker Sir Moses Montefiore who lived there between 1826 and 1885... The second resident was Countess Grosvenor, widow of Victor, Earl Grosvenor, and her second husband, the statesman George Wyndham. It also served as the childhood home of the second Duke of Westminster."

"The huge four bedroom maisonette, occupied by Douglas Fairbanks Jr and his second wife Mary from 1934 to 1941...  became one of London’s most fashionable addresses during the Thirties ...  Famous guests of Fairbanks ... included Rex Harrison, David Niven and Cary Grant and ... Lord Louis Mountbatten. ... After the Second World War the couple gave up the lease on 99 Park Lane and moved to another London home at No.8 The Boltons in Kensington." Other guests name-checked are Rothschilds, Churchills and Noel Coward.

This section lists the subjects commemorated on the memorial on this page:
Moses Montefiore

This section lists the subjects who helped to create/erect the memorial on this page:
Moses Montefiore