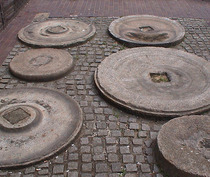 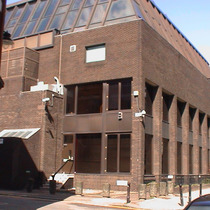 {On a modern sign:}
These millstones were found during the excavation of the old foundations in early 1975.

We can't identify any river that ran through here (the Fleet would be the nearest) so perhaps these come from a windmill. But it's not particularly hilly either. It took Deborah Hart Stock and Martin John Callanan to point out that power could also be provided by animals - not so geographically constrained.

2016: Chris Harry pointed us to British History on-line which says “One of the largest of several new factories was a drug mill, built in the 1780s by John Hurwood, millstones from which are preserved outside the present building on the site, Nos 36–43 Great Sutton Street.” And “… six mill-stones, discovered during excavation for the new building.” An 1890s map shows “drug mills” still occupying at least the centre of this block. Chris says the mill was probably animal-powered for a few decades and then steam-powered. Thinking a “drug mill” might be a type of mill we Googled and found: a) pictures of windmills and b) reports of recent drug busts and c) an early reference to a “steam spice and drug mill”. So we think the term refers to what is being milled rather than the construction of the mill itself, and at the time 'drug' would have meant 'medicine' rather than what it often means today.

This section lists the subjects commemorated on the memorial on this page:
Millstones

Where there are six millstones surely there must have been a mill?

We don't normally include graves but since this has been moved it is now eff...

We were reading this board and deciding it really was not interesting enough ...