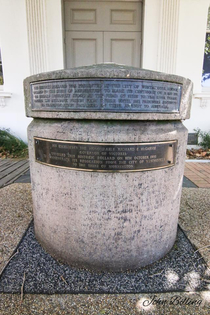 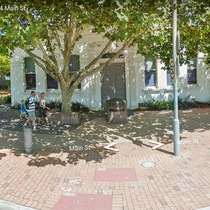 Credit for this entry to:
John Billing

This historic bollard was presented by the City of Westminster, London, England to the Shire of Mornington to mark its centenary on 31 May 1993. The bollard originally stood at the head of steps to the River Thames opposite the Millbank Prison from where until 1867 prisoners sentenced to transportation embarked on their journey to Australia.

His Excellency the honourable Richard E. McGarvie, Governor of Victoria, unveiled this historic bollard on 8th October 1993 to commemorate its relocation from the City of Westminster to the Shire of Mornington.

We thank John Billing, resident of Mornington, for telling us about this bollard and sending us all the information and the pictures.  (Though fully London-focused we do like an excuse to reach out to other parts of the world - see India, Pennsylvania and New York.)

John found the Mornington Historical Walk where we learn that the building was, c.1900, the Mechanics Institute and Free Library.

This section lists the subjects commemorated on the memorial on this page:
Millbank Prison - Australia

Created as New Mornington it was renamed on 19 January 1894 as the Shire of M...

This section lists the subjects who helped to create/erect the memorial on this page:
Millbank Prison - Australia

The size of this "wandering hour" clock, a 2 metre diameter, makes it unique....