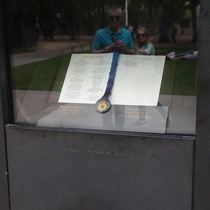 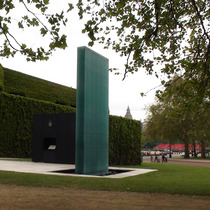 {Below the book of remembrance:}
Michael Winner, MA (Cantab) 1935 - 2013
Chairman and Founder of the Police Memorial Trust

A memorial service for Michael Winner, attended by, amongst others, Sir Roger Moore, Sir Michael Caine and Sir Michael Parkinson, was held at this site so we expect this inscription was unveiled at that ceremony.

The story of this important memorial is given at the Police Memorial Trust. Behind the tower of glass, in the creeper-covered block a book of remembrance is displayed behind glass. This book "starts with an unknown constable killed in 1680. There are nearly 1,600 names recorded, of those officers unlawfully killed while in the execution of their duty, or in the course of effecting an arrest or the performance of acts of gallantry or other hazardous duty, taken from the 4,000 names on the National Police Officers Roll of Honour of officers who have died in the line of duty." The creeper conceals a large concrete London Underground vent shaft.

This section lists the subjects commemorated on the memorial on this page:
Michael Winner

This section lists the subjects who helped to create/erect the memorial on this page:
Michael Winner

This section lists the other memorials at the same location as the memorial on this page:
Michael Winner

This is a finely detailed piece of sculpture and you don't have to look too c...

This pulpit is erected in memory of the Revd. William Cadman MA, canon of Can...

The grill is above a brick-walled tunnel which carries a mass of cables. The...