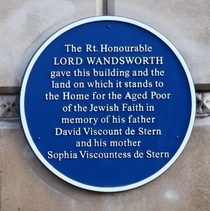 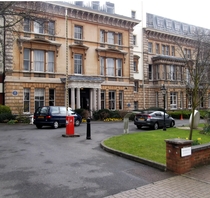 The Rt. Honourable Lord Wandsworth gave this building and the land on which it stands to the Home for the Aged Poor of the Jewish Faith in memory of his father, David Viscount de Stern and his mother, Sophia Viscountess de Stern.

This building was once the home of Sydney Stern, Lord Wandsworth. From Visit Jewish London: "Nightingale - London’s premier care home for older Jewish people.... Originally known as The Home for Aged Jews, Nightingale has a 170 year history, originating in the East End of London. In 1908, the Home moved into its current site in Clapham .... following a gift of the building and grounds by Lord Wandsworth, the Viscount de Stern. In 2008, Nightingale celebrated the centenary of its current site, which has been greatly improved over the years ..." It was probably during those improvements that the two stones found their way out to the little monument on the front lawn.

This section lists the subjects commemorated on the memorial on this page:
Lord Wandsworth - Plaque

This section lists the subjects who helped to create/erect the memorial on this page:
Lord Wandsworth - Plaque

This section lists the other memorials at the same location as the memorial on this page:
Lord Wandsworth - Plaque

Both these stones must have been rescued from the building during renovation ...

{Beneath a representation of the Victoria Cross medal:}Lieutenant Geoffrey Ca...

We failed to find this in Dec-Jan 2017, even with the exact address. It shows...

The plaque shows a shuttle and two bobbins, representing the local weaving tr...