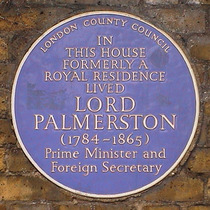 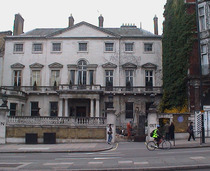 This house was erected in 1760 for the Earl of Egremont. Occupied by Adolphus, Duke of Cambridge, it became known as Cambridge House. On the death of the Duke, Palmerston acquired the lease and lived here from about 1855 until his death in 1865. (It’s interesting to note that in about 1808 Palmerston began a relationship with Egremont’s son’s illegitimate daughter, Emily, who he eventually married in 1839.) It was during Palmerston’s time that the front boundary wall was given two gates to allow carriages to enter the front drive and not block the road.

1866 - 1999 it was home to the Naval and Military Club, also known as the In and Out Club due to the bold lettering found on the gate posts. Since 1999 this grade I-listed Georgian mansion has had no permanent occupiers. Building has an interesting write-up.

We can find no justification for the plaque's claim that it was once a royal residence.

This section lists the subjects commemorated on the memorial on this page:
Lord Palmerston - Piccadilly

This section lists the subjects who helped to create/erect the memorial on this page:
Lord Palmerston - Piccadilly

Coburg DwelllingsThis block was built by the Mercers Company in 1904. It was ...