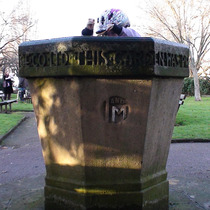 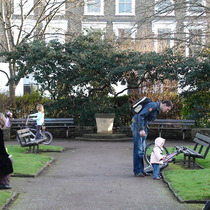 {Around the outside rim of the basin:}
This garden was presented by the London and Manchester Assurance Co Ltd

Arlington Square and Union Square hold two identical octagonal bird baths. Their 1950's design tallies perfectly with the redesign of the gardens carried out at that time. The outer rims are deeply incised with the text. Four faces of each bath are stamped with two alternating monograms which read "L and M" for London and Manchester and "MBI" for Metropolitan Borough of Islington.

In our photo the strange lump at the top of the basin is the helmeted head of a young person investigating the contents of the bird bath. We tried waiting for her to go out of shot but her interest outlived our patience.

From a modern information board on the garden railings we discover that the area was developed 1846 - 1858 by the Clothworkers' Company who in 1945 sold it to the London and Manchester Assurance Company. In the late 1940s ownership of the garden in Arlington Square (and probably Union Square as well) was transferred to Islington Council. The gardens were then restored and opened to the public in 1953. And they seem little changed, in Union Square even some crazy paving remains.

This section lists the subjects commemorated on the memorial on this page:
London & Manchester Ass Co - Arlington Square

This section lists the subjects who helped to create/erect the memorial on this page:
London & Manchester Ass Co - Arlington Square

This plaque is no longer in situ. Our picture is taken from 'London Plaques' ...

Cheshire CourtThe StandardMonday May 21, 1827{A facsimile of a page of the pa...