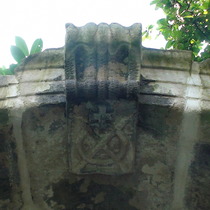 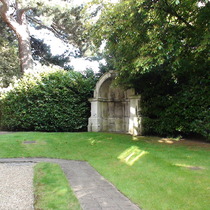 In case anyone is in any doubt about these alcoves being off London Bridge we photographed the Bridge House Estates logo under the keystone.

From Courtlands Estate history: The Hon. Heneage Legge, a younger son of the third Earl of Dartmouth, purchased the property in 1829 and after a few years demolished the old house and built a new one on elevated ground at the south of the site.   He called it Stawell House (pronounced as in ‘shawl’) and the Tithe Appointment map of 1839 shows the new layout.   Between the east front and the paddock was a terrace walk about 200 yards long which was flanked by balustrading from Old London Bridge dating from 1757-62.   At each end of the walk were two alcoves or 'porters' rests ....... Early in 1937 Stawell House was demolished and the building of the first blocks of flats ...... was completed in 1938.   During the development the balustrading along the terrace and the alcove or porters’ rest at the north end disappeared, but the porters’ rest at the south end did not interfere with the new buildings.....

We read that to mean that originally there were 2 alcoves here and that now only one remains.

Perhaps we shouldn't tell you this but, looking for this alcove, we searched the gardens to the west of the flats and they are unexpectedly lovely. These gardens survive little changed from the days of Stawell House.

This section lists the subjects commemorated on the memorial on this page:
London Bridge alcove at East Sheen

This section lists the subjects who helped to create/erect the memorial on this page:
London Bridge alcove at East Sheen

This 'Greathead' type tunnelling shield ws left at this point 18 metres below...

{On a nearby plaque:}Section of the Berlin Wall'Change Your Life' by the graf...