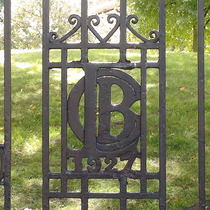 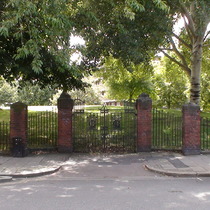 Lambeth Council’s first 4 tenement blocks of council housing were built on Princes Road (now Black Prince Road) in 1927, replacing a workhouse. Two of the blocks were demolished after WW2 (we would have guessed bomb damage, but see below) and the site turned into open space, leaving just these handsome gates. The 2 remaining blocks are Sullivan House and Deacon House - either side of the gates.

2017: Via Facebook Edmund Bird and Steve Lane informed us that the blocks were not damaged during the war at all. It was in the 70s that Lambeth Council demolished Severne House and Gregory House on Black Prince Road “to reduce housing densities”, apparently with no intention of redevelopment - unusual behaviour.

This section lists the subjects who helped to create/erect the memorial on this page:
Lambeth Borough Council gates

This small plaque is on the inner gate pier to the right of our photo. We li...

This gateway commemorates the Borough of Holborn 1900 -1965.

A nearby information board provides: "Following site redevelopment these sple...