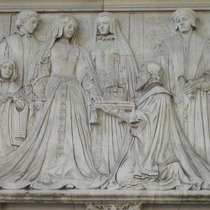 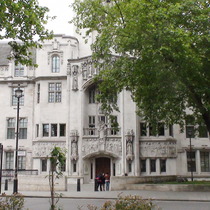 This building was designed by James S. Gibson and Partners and built 1906-1913, in what Pevsner described as art nouveau Gothic. Originally designed to be the Middlesex Guildhall as offices and to house the quarter sessions, it was converted to a crown court in 1964 and then in 2009 to the Supreme Court.

We were puzzled why the Middlesex Guildhall should be in Westminster. It's complicated but here goes ... All of London, with the exception of the City of London, was part of Middlesex until 1889 when the County of London was formed. The building on this site at that time was effectively the Westminster Guildhall. And there was a building in Clerkenwell, the Middlesex Sessions House. The two buildings were "swapped" so that the one in Westminster could be used by Middlesex and the one in Clerkenwell could be used by London. This may not be the whole story but we think that is the gist of it.

This section lists the subjects commemorated on the memorial on this page:
Lady Jane Grey accepting the crown

Son of John Dudley and husband of Lady Jane Grey - see there for more informa...

This section lists the subjects who helped to create/erect the memorial on this page:
Lady Jane Grey accepting the crown

This section lists the other memorials at the same location as the memorial on this page:
Lady Jane Grey accepting the crown

This section is to the left of the entrance arch. The description of "Henry ...