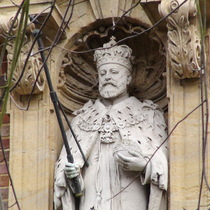 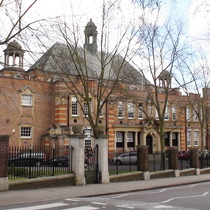 A 1908 article in the New York Times nicely describes the king as being in "infinite toggery" and suggests the statue was unveiled in late December 1907. But the Sanderson & Melville book "King Edward VII, his life & reign; the record of a noble career" seems to say that the King’s visit took place on 24 June 1907.

Protected in its niche the statue's detailed carving can still be seen, but the metal sceptre strikes us as odd. We wonder if the statue started with a stone sceptre but it was damaged in some way and this is the replacement. This sceptre has a bird on the end which signifies the monarch's role as head of the Church of England. The alternative ending would have been a cross, which signifies his/her role as head of state role. Annoyingly, nowhere can we can we find the name of the sculptor.

University College School was founded in 1830, and being part of University College, was originally located in Gower Street. In 1907 the senior school was moved into these purpose-built premises designed by architect Arnold Mitchell. Opened by the be-statued King.

The gate piers carry some weather-worn lettering which on the left probably reads 'Kings', and on the right, 'Park' though there only the 'A' is legible.

This section lists the subjects commemorated on the memorial on this page:
King Edward VII statue - NW3

The plaque with this text utilizes an unusually interesting script, reminisce...