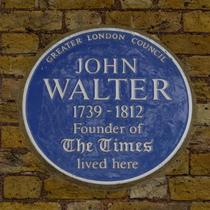 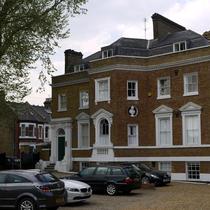 From Times Property:
The area was fashionable in 1750, when Walter built his house {but see below}, and other Georgian mansions sprung up along the north side of Clapham Common. A matching house was built across the road and the two were known locally as “The Sisters”.
Nearly 150 years later, {William} Morris’s sister, Deaconess Isabella Gilmore, a pioneer of female vocations in the Church of England and a tireless worker among the poor of Battersea, leased it for use as a training centre for deaconesses. According to a leaflet containing extracts from her diaries printed in 1924, the year after her death, Gilmore said: “As we crossed the common on Sunday afternoon, we came out near the front gate of a beautiful house called The Sisters . . . seeing a furniture van at the door, I was curious enough to ask if the people were leaving. ‘Gentleman dead,’ was the reply. A fortnight later a board appeared, ‘This house to let’. I asked permission to go over it, and then went to our warden, ‘One of the Sister houses is to let, we must get it’.”

Gilmore persuaded the Church to buy it for £5,000 and commissioned a side extension and chapel from the Arts and Crafts architect Philip Webb, on the recommendation of her brother, with whom Webb had founded the Society for the Protection of Ancient Buildings in 1877.

From Anglican History :
“We sat and had tea, then he [Webb] said, ‘Tell me what you want’. I said, ‘I want something perfectly simple, I want the green of a field and a great big silver cross’. We began to build in the spring of 1896. That was a sad year for me. My dear brother William passed away in the autumn. The building went on all the winter ... About 50 men worked there all that time. Early in 1897 all was finished. We had a grand opening and the chapel was dedicated. I hope it will be left simple with the great cross, and the names, in the panels, of those who have passed away.” The silver cross is now, with all the chapel furnishings, in the Victoria and Albert museum, but there remain three small stained-glass windows by Morris and Company, from cartoons by Burne-Jones, featuring saints and angels.

Gilmore House remained as a theological college training women for ministry until 1970, when it became a hostel for overseas students. The chapel was used as a storage room and no decorative features from Walter’s original house remain, though the exterior is now clean and smart, with ornamental busts of Milton and Shakespeare.

The Oxford Dictionary of National Biography has Walter living here 1772-82, when he temporarily went bankrupt and had to vacate.

Much more about Isabella Gilmore at London Details.

2020: Via Facebook Jeanne Rathbone informed: "The Sisters House was not built by John Walter. The Survey of London:The watershed came in the 1750s and 60s, a boom time for London suburban building generally. First came the Sister Houses, a matching pair of speculative villas of c.1755 built by the merchant Isaac Akerman to frame a grand vista opposite the mansion established by his father at Battersea Rise." This text comes from a 'draft - Survey of London © English Heritage 2013', and we give it more credibility than Times Property.

This section lists the subjects commemorated on the memorial on this page:
John Walter

Newspaper, founded by John Walter on 1st January 1785 as The London Daily Uni...

This section lists the subjects who helped to create/erect the memorial on this page:
John Walter

We think the 75 ft of wall which collapsed were actually in Millbank which is...

The plaque was originally erected on the house where she had lived. This was ...