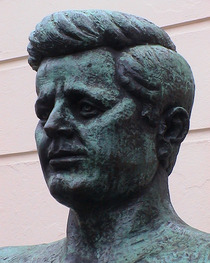 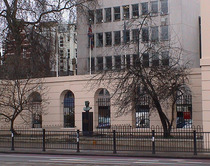 {On a plaque attached to the wall behind the bust:}
This bust of President Kennedy by the American sculptor Jacques Lipchitz was unveiled on the 15th May 1965 by his brother Senator Robert Kennedy. This memorial was subscribed for by over 50,000 readers of the Sunday Telegraph in amounts limited to £1.

The original bust was first installed in 1965 in Military Park, Newark, New Jersey. Additional bronzes were cast for this site and for the Kennedy Memorial Library, Cambridge, Massachusetts.

Unveiled in London by Robert Kennedy assisted by his brother, Edward.

The hostel was built in 1965 and the bust installed here, in what was at that time the hostel's front forecourt. It was unveiled the day after the unveiling of the Kennedy memorial at Runnymede.

21 August 2017: The Telegraph reported that the bust had been vandalised and thus had been removed for conservation work. We thank Eddie Sullivan for first spotting that the bust had gone and then for finding this explanation. We look forward to hearing about its return.

2019: Hyde Park Now reports that "in view of the vandalism it was decided to bring the memorial inside the ISH itself. A new plinth was made and the bust of JFK placed on the top. Its just inside the main doors so people can see it without needing to enter the building proper." Entrance is from Great Portland Street. That website is the source for our information concerning the bust's original location, and they have a photo of it there. In the background of that photo you can see the building on the corner of Albany Street and the north side of Marylebone Road. This confirms that the bust originally faced away from Marylebone Road with no classically-styled screen wall.

At the bust’s new location (follow the road around to the left and you will find it) there is an information panel describing the bust’s origins, at its first location. This panel includes a framed newspaper photo of the unveiling captioned: “London’s first memorial to Kennedy unveiled”, and some explanatory text, as follows:

The JFK bust is a unique part of International Students House heritage and is located in an eye catching position facing the busy Marylebone Road.

The shock of JFK’s assassination prompted the Sunday Telegraph newspaper to launch a memorial appeal for contributions of not more than £1 each. Over 50,000 donations were received, many from children and schools. With Jackie Kennedy’s agreement, it was decided that the memorial should take the form of a bust by the renowned sculptor Jacques Lipchitz.

International Students House was then being built and it was agreed that it would be the most suitable site in London for a memorial to a youthful President who had been become {sic} identified with liberal ideas. The memorial bust was unveiled by Senator Robert Kennedy, assisted by his brother, Senator Edward Kennedy, on the 15th May, 1965.

BBC TV News reported that evening that the bust was “… a lasting tribute to a great American on a spot that is a meeting place for students from all over the world.”

2020: Removed from this location in 2017 and reinstalled in 2019 in the foyer of the building. Since the bust is no longer at this site we have marked this one as 'Lost'.

This section lists the subjects commemorated on the memorial on this page:
John F. Kennedy bust - Marylebone Road

This section lists the subjects who helped to create/erect the memorial on this page:
John F. Kennedy bust - Marylebone Road

Born at Boston, Massachusetts. Assassinated at Los Angeles, California while...

Born as Chaim Jacob Lipchitz Druskieniki, Lithuania. Died on the island of C...