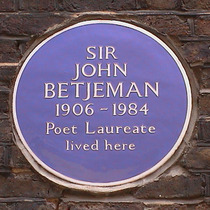 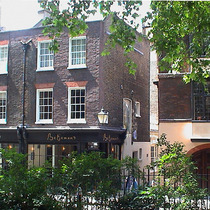 Betjeman rented this two-room flat 1954 - 1973.  In 1951 he met Lady Elizabeth Cavendish and began a long, important affair with her.  His wife remained, ignorant, in the country while this house was what the tabloids would have called Betjeman’s love-nest. Elizabeth was with Betjeman when he died.

This house is now available to rent from the Landmark Trust. The large window to the left of the plaque is very interesting - it's not actually a window at all. It contains a painting of a window and the interior scene that one might see looking through that window. This painting is protected with a sheet of plastic which is slightly curved which makes viewing the painting extremely difficult. The bottom section of the painting shows a low wrought-iron window railing and some indoor plants. Further into the room there are some people, possibly at tea, but the reflections in the top section obscure most of it.

According to Medieval London the building across the alley, to the right of our picture, is claimed to be "the oldest house in London still standing".

Diamond Geezer has done a very good post on this building and Cloth Fair generally.

This section lists the subjects commemorated on the memorial on this page:
John Betjeman - EC1

The plaque was unveiled by the writer and former MP Gyles Brandreth.