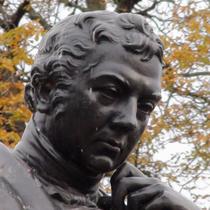 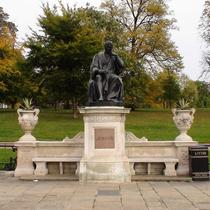 {On a red granite panel laid into the front of the stone plinth:}
Jenner
{On a bronze plaque laid into the ground in front:}
Edward Jenner, MD, FRS, 1749 - 1823, country doctor who benefited mankind.
In Jenner's time smallpox was a dreaded disease worldwide and caused many deaths particularly of children. Survivors were left badly scarred and often blinded or deformed.
In 1796 Jenner vaccinated James Phipps with cowpox and showed that the boy was then immune to smallpox. He predicted the worldwide eradication of smallpox. This was finally achieved in 1980.
Jenner was born, practised and died in Berkeley, Gloucestershire and studied at St. George's Hospital, London.
This statue by William Calder Marshall RA was inaugurated by Prince Albert, the Prince Consort, and was the first to be erected in Kensington Gardens in 1862. The cost was met by international subscription.
[Stamped onto the base of the statue:}
W. Calder Marshall, R. A. Sculpt. 1858

This statue was unveiled by Prince Albert in 1858 in Trafalgar Square. It was moved to Kensington Gardens (the first statue erected here) in 1862 as a result of pressure from anti-vaccinationists. Medical News Today reported in March 2010 on a campaign to have it reinstated in Trafalgar Square.

This section lists the subjects commemorated on the memorial on this page:
Jenner statue

This section lists the subjects who helped to create/erect the memorial on this page:
Jenner statue