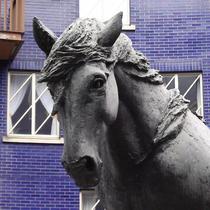 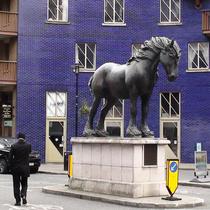 {On a bronze plaque attached to the front of the plinth:}
Jacob, the Circle dray horse
The famous Courage dray horses were stabled on this site from the early nineteenth century and delivered beer around London from the brewery on Horselydown Lane by Tower Bridge.
In the sixteenth century the area became known as Horselydown, which derives from 'horse-lie-down', a description of working horses resting before crossing London Bridge into the City of London.
Jacob was commissioned by Jacobs Island Company and Farlane Properties as the centrepiece of the Circle to commemorate the history of the site. He was flown over London by helicopter into Queen Elizabeth Street to launch the Circle in October 1987.

{On a bronze plaque attached to the back of the plinth:}
The Circle, Tower Bridge
A development by Jacobs Island Company plc and Farlane Properties NV
Architects: Campbell Zogolovitch Wilkinson & Gough, Robinson Keefe & Devane
Completed 1990

We are not convinced by the derivation of Horselydown. Horses don't lie down to rest, do they? We imagine this horse is named Jacob after the commissioning property developers, Jacobs Island Company, who took their name from the Victorian name for this area, Jacob's Island, at the time a notorious slum, celebrated in 'Oliver Twist' as the scene of Bill Sykes’s death.
According to the sculptor: My objective was to portray the dignified tolerance and the power of these horses plus the hint of resignation to men’s direction and the vagaries of a cold wet windy winter.

Silver Tiger kindly wrote to tell us that Jacob has a brother, Drummer, by the same sculptor. He was installed in Dorchester at the site of another brewery in 2014.

This section lists the subjects commemorated on the memorial on this page:
Jacob the dray horse

This section lists the subjects who helped to create/erect the memorial on this page:
Jacob the dray horse

Nice large bronze reliefs, also by Roseleib/Roslyn, attached to the left and ...