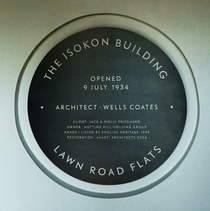 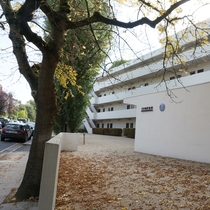 The plaque is in the foyer of the flats. It was unveiled by John Pritchard, grandson of Jack and Molly Pritchard and Matt Cohn, grandson of Wells Coates.

Flats designed by Wells Coates for Molly and Jack Pritchard. Originally the block had 32 flats (later extended to 36). Most of them had very small kitchens as there was a large communal one for the preparation of meals, connected to the residential floors via a dumb waiter. The building gradually deteriorated, and was temporarily abandoned until 2003, when it was refurbished.

This section lists the subjects commemorated on the memorial on this page:
Isokon Building

Architects. Projects include the restoration of the Natural History Museum fa...

Architect. Born Wells Wintemute Coates in Tokyo of Canadian parents. He was i...

Furniture designer. In 1929 he founded the firm of Wells Coates and Partners,...

This section lists the other memorials at the same location as the memorial on this page:
Isokon Building

The plaque, as well as having rather peculiar punctuation gets the year of de...