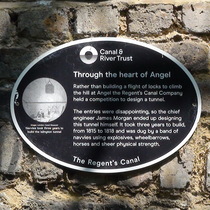 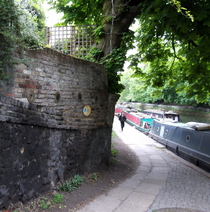 Through the heart of Angel
Rather than building a flight of locks to climb the hill at Angel the Regent's Canal Company held a competition to design a tunnel.

The entries were disappointing, so the chief engineer James Morgan ended up designing this tunnel himself. It took three years to build, from 1815 to 1818 and was dug by a band of navvies using explosives, wheelbarrows, horses and sheer physical strength.
The Regent's Canal - Canal & River Trust

We note that the plaque, twice refers to 'Angel', not 'the Angel', and realise that we are not sure which usage is correct.

This section lists the subjects commemorated on the memorial on this page:
Islington Tunnel - east - new

This section lists the subjects who helped to create/erect the memorial on this page:
Islington Tunnel - east - new

This section lists the other memorials at the same location as the memorial on this page:
Islington Tunnel - east - new

Site of St. Katherine Coleman demolished 1926.Corporation of the City of London

Palingswick House was built in the mid 19th century as a private residence, p...

The Avenue was a series of books.