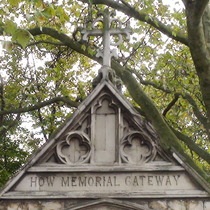 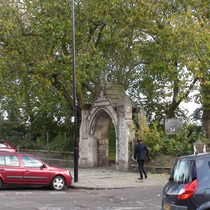 {On the front:}
How Memorial Gateway

{Stone inlaid to the inside left of the arch:}
To the glory of God and in living memory of the Reverend George Augustus Mayo How MA, Prebendary of St Paul's, Rural Dean of Stepney and Vicar of Bromley St Leonard for twenty years.
Born November 2nd 1840.
Died February 18th 1893.

This gate leads into a much overgrown graveyard which contains a modern information board:

"St Leonard’s Priory was founded in the 11th Century during the time of William the Conqueror.  It was home to between eight and thirty Benedictine nuns led by a prioress.  Legend has it that the Prioress of St Leonard’s was the inspiration for the prioress character in William {sic} Chaucer’s Canterbury Tales.

In 1536 King Henry VIII began his quest to reduce the power of the Catholic Church by closing the monasteries and priories.  St Leonard’s Priory was handed over to Sir Ralph Sadler, a top member of Henry’s government.  In 1635 new owner Sir John Jacob demolished most of the original buildings to make way for a manor house.

By the 17th Century only parts of the original church remained standing and were taken over by protestant wealthy merchants from France, known as the Huguenot refugees.  The chancel was altered and rebuilt in 1843 as the Parish Church of St Mary with St Leonard.  It was one of the few Norman buildings left in London by that time.

Tragically during a bombing raid in the Second World War Blitz of 1941 the church took a direct hit and was completely destroyed.  Then in 1969, the Blackwall Tunnel Northern Approach Road was built over most of the former site of the Convent and the Church, leaving just a small area of overgrown Huguenot graves and a Memorial Gate to the one-time Parish Rector Rev. G. A. How, erected in 1894.

These events in the history of this site are remembered in some of the block names of the Bow Bridge Estate: Prioress House, Canterbury House and Sadler House."

This section lists the subjects commemorated on the memorial on this page:
How memorial gateway

This section lists the subjects who helped to create/erect the memorial on this page:
How memorial gateway

Chairman of George How Memorial Committee.

Hon. Sec. to George How Memorial Committee.  The damaged memorial seems to ha...

This object is known as an armillary sphere, or astrolab - a skeletal celesti...