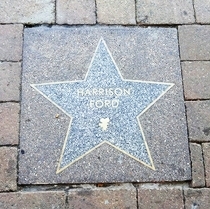 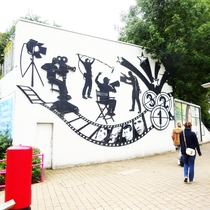 The plaques are around the station forecourt, either on frames or laid into the pavement. The gold lettering on the marble effect on the pavement plaques makes photography difficult.

Although there is nothing on the memorials themselves we believe that the British Film Institute was involved in erecting those representing a cell from a roll of film so we have added it as a creator for those memorials.

This section lists the subjects commemorated on the memorial on this page:
Harrison Ford - pavement plaque - Elstree and Borehamwood Station

Actor. He first came to fame, playing Han Solo in the Star Wars films. He wen...

This section lists the other memorials at the same location as the memorial on this page:
Harrison Ford - pavement plaque - Elstree and Borehamwood Station

Harrison Ford This heritage panel celebrates the work of the distinguished, a...