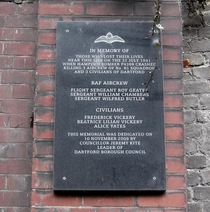 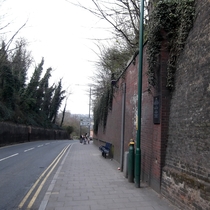 {Beneath the RAF wings badge:}
In memory of those who lost their lives near this site on the 31 July 1941 when Hampden bomber P4399 crashed killing 3 aircrew of no. 61 squadron and 3 civilians of Dartford.

This memorial was dedicated on 10 November 2009 by Councillor Jeremy Kite leader of Dartford Borough Council.

Researching the names on the plaque Andrew Behan found the addresses of the civilians which gave us the site of the crash. This is a little to the east of the plaque. The houses hit, where the civilians died, were 65, 67 and 69 East Hill. These are on the south, set back a bit from the road, with a few steps between two piers, and a path between them.

This section lists the subjects commemorated on the memorial on this page:
Hampden Bomber P4399 crash

At around 4 am, the plane is thought to have got caught in an electrical stor...

It was first formed in Rochford, Essex as a fighter squadron of the British R...

Civilian killed in the crash of Hampden bomber P4399. Our colleague Andrew B...

This section lists the subjects who helped to create/erect the memorial on this page:
Hampden Bomber P4399 crash

Formed by the merger of the Municipal Borough of Dartford, Swanscombe Urban D...

The verse is from "The Dead" by Rupert Brooke.