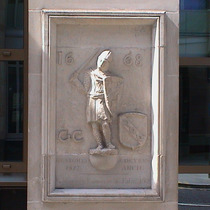 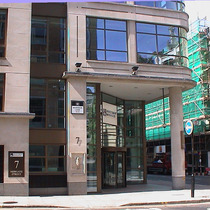 Internet Archive gives: "On the north-west corner of Warwick Lane is an effigy of Guy, Earl of Warwick. He is dressed as a knight in armour, and the stone bears date 1668." This location seems to have been the site of a Warwick Inn, owned by the Earls of Warwick since about 1450, and lost in the Great Fire of 1666.

Pennant's London apparently has something to say about this item in the 5th edition, on page 492. We are surprised to find such a reference carved in stone, but there it is. Perhaps Mr Pennant paid for the restoration and got this piece of publicity in return. The restoration must be when the clearly visible additions were made top and bottom.

Old London Maps says: "The lane derives its name from the Inn or house of Richard Neville, the king-making earl of Warwick." He was 15th century, not a legendary hero. That suggests some long standing confusion.

We have found two other comparable plaques of similar date: St Olave, Silver Street - destroyed and Boy and Panyer.  Spitalfields Life has an excellent post on old London signs, which includes early photos of the Warwick plaque and the Boy and Panyer.

This section lists the subjects commemorated on the memorial on this page:
Guy, Earl of Warwick

Pennant's London is a book about London published in the early 1800s. The Pic...

This section lists the subjects who helped to create/erect the memorial on this page:
Guy, Earl of Warwick

{Inscribed in the bottom left corner:}Kremer 1875