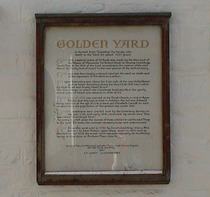 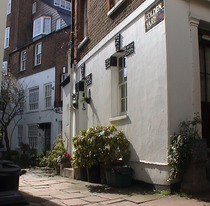 Golden Yard
is derived from "Goulding" the family who dwelt in the Yard for about 200 years.

The first copyhold grant of 20 Rods was made by the then Lord of the Manor of Hamstede Sir Robert Wroth to Henerye Gouldingy "by the Rod at the Will of the Lord according to the custom of the said Manor by Fealty Suit of Court" in the last quarter of the 16th Century.

The area was then largely a disused sand pit, the sand no doubt used in the expansion of Elizabethan London.

Its upper boundary was along the east side of the now Holly Mount and its lower boundary along the then Cloth Hill, later called the High Road and finally Heath Street. The first cottage in which the Gouldings lived was No. 6 the yearly rental value of which was assessed in 1646 at £3.

Henry Goulding was married at the Parish Church in 1574 to Agne Bolden and they had at least 6 children, the 3rd son Edward married at the age of 12 to a local girl Elizabeth Lacraft in 1601, at which time the population of Hampstead was under 200.

Other residences were erected here by the Goulding family in the late 17th and early 18th centuries, by which time this was called "Goulding's Yard." An entry in 1758 gives the names of those entitled to use "the said Pump in the yard for water, the common necessary house and watercourses".

The properties were sold in 1779 by Sarah Goulding (then a Mrs Brown) to John Bitton, upon whose death in 1822 and as directed in his Will the small estate was sold separately, his beneficiary living at that time in Benham Place close by.

This section lists the subjects commemorated on the memorial on this page:
Golden Yard

Married to Henry Goulding in 1574.

This section lists the subjects who helped to create/erect the memorial on this page:
Golden Yard

In 1960 was living or working at 6 Golden Yard, Hampstead.