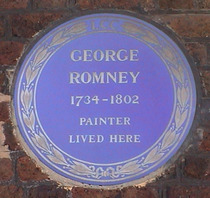 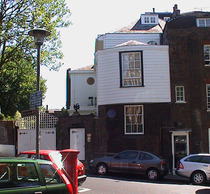 The house, designed by Samuel Bunce, was built for Romney in 1796, from the outbuildings of a house on The Mount, as a palace of art. He had been living in Cavendish Square but needed somewhere to exhibit his own work and also his Grand Tour finds. This building was a home and studio as well and the cost almost bankrupted him.

1801 he sold it to Mr and Mrs Rundell. In 1807 it was enlarged and turned into the Hampstead Assembly Rooms, where Dickens, Constable and Elizabeth Fry all held public meetings. By 1929 the house was crumbling but was saved by Sir Clough Williams-Ellis who lived here until 1948 when he sold it to Raymond Russell, a musician who used it for concerts and for his collection of harpsichords and other early instruments.

In 1952 it was bought by Eve and Derek Faraday, founders of the Star Sound Studio, Britain's first independent recording studio, who needed to expand their successful central London business. They also lived at Romney's House and entertained there, until 1994. Artists who visited include: Vera Lynn, Noel Coward, Max Bygraves, Jon Pertwee, The Beatles, Frank Sinatra and the Rolling Stones. It is the only Grade 1 listed private house in Hampstead.

This section lists the subjects commemorated on the memorial on this page:
George Romney

Marsh HouseTo commemorate the work of Arthur E. Marsh, a founder member of We...