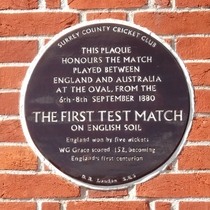 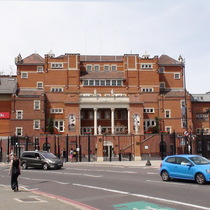 The "D.R. London S.E.5" is puzzling. The Oval is in the SE11 post code, not SE5. Possibly "D. R." is an organisation, based in SE5, that was involved in erecting this plaque, but we can't think which.

From British History Online: "During the war of 1939–45 the Oval suffered both from bombing and from neglect. It was used as a searchlight site and subsequently set out, though never used, as a prisoner-of-war camp. In 1945, after de-requisitioning, 40,000 turves from Gravesend were laid, and cricket was resumed at the beginning of the season of 1946."

This section lists the subjects commemorated on the memorial on this page:
First Test Match in England

Played between national teams, test matches are the longest and considered to...

This section lists the subjects who helped to create/erect the memorial on this page:
First Test Match in England

This section lists the other memorials at the same location as the memorial on this page:
First Test Match in England

Parish Lock-up About 1730, this lock-up was built into the garden wall of Can...

This site was previously called Sunlight Wharf, where the last working crane ...

{On the top plaque there is a section of gilded inscribed poetry by John Dryd...