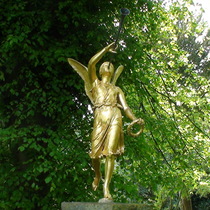 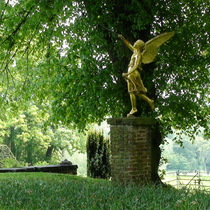 The statue glistens with recent gilding. This was first done in 2002 in honour of the Golden Jubilee, by Lady Sitwell (1923 - ), the mother of Alexandra Hayward, the current owner of Renishaw Hall, and then again in 2017.  And on each occasion she did the work herself.

The statue is in the Renishaw garden, at the southern end of Top Lawn, near Flag Walk.

This statue originally topped the Three Poets fountain in Mayfair. See there for the London life of this winged trumpeter. Summer 2018 we visited Renishaw, saw the lovely Fame and met the immensely helpful Chris Beevers, Renishaw's archivist.

Via Facebook, Melanie Williams, directed us to Osbert Sitwell's essay titled 'Moving House'. We found this essay in ‘Queen Mary and Others’ by Osbert Sitwell, 1975. Chris kindly transcribed the relevant text for us from her copy, page 166: “I had come home from a sojourn abroad to find that a friend of mine had given me Sir Hamo Thorneycroft’s Muse of Fame, removed by the authorities from the top of the Poets’ Fountain which had stood outside Londonderry House. She had presided over the figures of Dante {sic}, Chaucer and Shakespeare, before they had been destroyed in a fit of planning ardour. The Muse could not enter my London House owing to the great span of her golden wings. Now almost concealed by luxuriant rhododendron bushes, she blows her trumpet to the empty air of solitude of my Renishaw garden.” The current owner, Alexandra Hayward, remembers discovering Fame, hidden by rhododendrons, when as a child, she first played in the garden c.1965. Her mother, Penelope, Lady Sitwell, had it moved to its current more prominent position.

Chris confirms that it was indeed Osbert who brought the statue to Renishaw – her archive has a photograph of Osbert beside the statue as it is taken out of its packing crate, believed to be from a series of photographs taken by Haywood Magee for Picture Post in September 1949. Osbert’s contributions to Renishaw were normally objects of art for the house and Fame was his only addition to the garden.

Chris points out that the Renishaw archive holds examples of letters from Edith, 7th Marchioness of Londonderry (1878 – 1959) with whom Osbert was good friends. He probably often visited Londonderry House, one of the venues where the London social elite gathered and partied during the first half of the 20th century. This is relevant because Londonderry House (on this 1864-71 map under its original name Holderness House) overlooked the monument, as shown in this Country Life Images photo. Londonderry House remained in the family until 1965 when it was sold to the next-door Hilton Hotel who demolished it. Could Lady Londonderry be the friend who gave Fame to Osbert?

Despite all the research and our consequent verbiage we are left with some questions: Who was the friend who gave Fame to Osbert? And how did he/she acquire it? Who were the three seated female figures intended to represent? There were 7 figures on the monument and we don’t know which Thornycroft did which figure. Since Fame is the only extant figure it would be particularly good to know her creator: Thomas, Mary or Hamo?

This section lists the subjects who helped to create/erect the memorial on this page:
Fame

Sculptor. Born Norfolk but in 1823 her family moved to London, 56 Albany Stre...

When you have a winged character overpowering a dragon - who is it - St Micha...

The artists worked with the Rope Makers Guild to produce this image of two sk...